Every ending has a beginning, thankfully this is so true for the Dutch band “de Heideroosjes”. They quit the band life in 2012. But last year during their yearly BBQ event for the old crew luckily someone did mention the band did exist 30 years in 2019. So they started to think about a reunion gig. One gig became two, and a few warm-ups in Germany and the end result is a festival summer with the band. Now they call it a anniversary year, same as the goodbye tour in 2012 lasted for the whole year. I mentioned it before I was one of the lucky bastards to have a ticket for one of their shows. Why lucky, because all tickets were gone in three minutes. 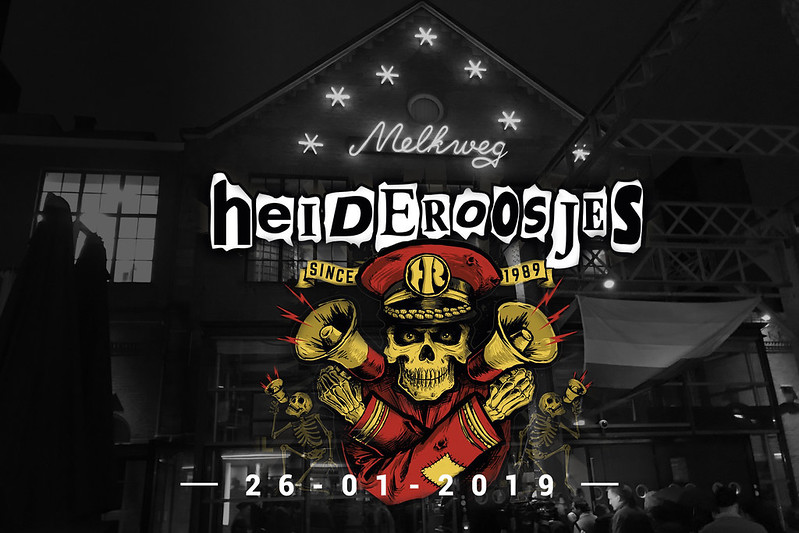 Being a teenager this band was one of my favorites, so good to see I’m not the only ex-teenager longing for some good old punk songs. Why? Because the Melkweg venue was sold-out with mostly 40 year old punks, not that skinny anymore, being a parent with responsibilities, working at the office from 9 to 5. But not tonight! Tonight everyone will be that teenager again, with their friends throwing up a mosh pit and singing loud and proud together all the classic songs, from Punica (the non-alcoholic fruit drink from the old days) till I’m not Deaf.

Support-act tonight was another band from the village Horst (the village de Heidereoosjes can call home), tonight it was time for the Afterpartees! Great band, signed by Excelsior. Young guys who once started in a Heideroosjes cover-band called de Weideroosjes. Don’t think the Heideroosjes can ask for a better supporting act than these guys. Everyone who’s attending their show will leave the party at the end of the night with a big smile. Well not tonight thanks to these guys we start the evening with a big smile. The band is full of energy like untamed wild dogs on stage. This is Powerpop written with a capital! When you have some time left, be sure to check out their albums Glitter Lizard and Life is Easy. Where Glitter Lizard is my favorite, with the last track Red Bull as a must listen!

De Heideroosjes are coming on stage with a song from Thin Lizy as their guide. Talking about old guys… ? They start playing with the song that bonds everyone at once, United scum “Fools, punks and skins united as one Don’t talk about politics just have fun”. What follows is a fast, energetic show lasting for 2hrs. The setlist is a nice mix from almost all the albums with older songs like Listen to the Pope and Tering Tyfus Takketrut till more recents songs like Homesick for A Place and Ik zie je later. But I’m missing songs from the last album Cease Fire here… The band did receive a warm welcome by the fans and after every song follows a thundering applause.

Marco Roelofs the front-singer tells it himself while walking around at the stage, they become 7 years older since their last show. That’s why the band did update a few of their lyrics because some songs were overtaken by time. They couldn’t sing about Bosnia anymore, but they changed it to Syria for example. While the TV shows mentioned in Klapvee had an update by name (not all but some of them are still playing on tv) and the name of the TV hosts.

When you look at the audience you will see a wave of red t-shirts (myself included). The band it’s most famous one-liner printed on the back. They sold the T-shirt during the years in different versions. I’ve searched and found it deeply hidden in my closet, a print of the first version of the shirt. The back-side is screaming “I’m Not Deaf I’m Just Ignoring You”. I think this is THE merchandise item they sold the most in those 30 years of band history.

Even these rockers are getting old, somewhere halfway Marco is telling that he has always wanted to eat a banana on the stage while the audience was watching. Well he did eat his banana while taking a breath to resume he was telling the band needed those 7 years to fully recharge the battery. Well not only the band was fully charged, the audience too. From the first song till the last, the people jumped from the stage and dived into the pit and the fists were all over in the air.

It was hard to let the band go off the stage because I’ve never seen the Melkweg like this before. It is true even old punks never forget how to rock! ?

Encore:
Not So Long Song
A Hippie Sing Along
I’m Not Deaf (I’m Just Ignoring You!)
Damclub hooligan

I’ve created a Spotify playlist, if you’re curious how the punks do sound. You can find the playlist here.

Related Articles
Blog: Where baby steps will have turned into giant leaps when you look back at your progress
Photography: Leave a little sparkle wherever you go 📸✨
Blog: Long time no see 🏄‍♂‍