A competition founded by @lightcaptured. He does try to change the subject every new round, last round the subject was People in the city. I joined that round with a photo taken in Meknes, one of my first trips together with @dboontje. This round it will be Black & White ?

I joined @lightcaptured his great competition with a photo from Neist Point, the famous lighthouse at the Isle of Skye. As that was my winning country I decided to look back through my Scotland pictures.
The picture I choose to compete with, shows for me that you don’t need expensive equipment to create a picture with a story.

We were on the road after visiting Smoo cave. You know that cave? Wait you don’t know it? Let me tell you something about it because it is a cave with a story behind it. We got up early this day at the beach. Last night we had a BBQ session with the company of a seal and the sound of puffins far far away. Yes that spot was at John o’Groats. A part of Scotland where some of my Dutch roots can be found. The story tells that there was once a guy Jan de Groot who owned the ferry rights in the name of the king Jacobus IV between Scotland and the Orkney Islands. Jan his roots where in the Netherlands, how he got here I don’t know. But why he stayed here I could imagine, the area is the way I would like it. Rough country, no trees in sight, rocks, water and emptiness around you everywhere. We ended the day with beautiful weather and a nice sunset. But there where already clouds forming at the horizon. So we set our alarm to ring somewhere around sunrise so we could pack our stuff early in the morning without rain we hoped. That morning we woke up and we just could pack our stuff and clean the spot before the rain started to fall down. We started the car and where on our way to Applecross, we did hear from @smalltall that we needed to camp here at least for one night.

It was really raining cats and dogs from that moment on! You can’t expect anything else in Scotland I assume? We called ourselves lucky with three days of sunshine during our three week trip through this beautiful country. Ok let’s get back to my original story, maybe I should write down my Scotland adventures to? We followed the coastline during that day and came accross the Smoo cave while we just passed Durness.

The cave is really special because it is formed in two ways, the first one is because of erosion at the front caused by the ocean. In front of the cave you’ll find a tidal gorge from at least 500m long I think. This was once part of the cave and the whole gorge had a roof but this is collapsed. The second part is created by a river coming from the inlands. The river is called Allt Smoo and it is dripping through the ground finding it’s way to the ocean.

Smoo cave has actually two rooms, the first one has a waterfall but we couldn’t even get there because the water inside was too high. There is also a second room, and when the water is lower you can reach that part by boat. This cave has some nice stories and legends. There was a villain once called McMurdo, this guy throwed his victems from the entrance above, won’t deepen this story, and a story about a wizard called Donald Mackay while he defeated the devil himself here twice by playing the devil his own card. He escaped by the use of deception, guess he was very lucky?

After visiting Smoo Cave we came after an approx 2 hour drive following the coastline south accross a ruin. The ruin was called Ardvreck Castle. It’s a ruin nowadays, nothing more than a tower and a wall of defense that are still there. Built in 1490 the castle is owned by the MacLeod clan till 1672 when the MacKenzie clan attacked and captured the castle.

There is also a legend by this castle yeeeah! In 1650 James Graham was captured and held at the castle before transportation for its own execution in Edinburgh. One of the ghost stories nowadays is from a grey man wandering around the castle and he has company from a smaller girl. The story goes that James Graham got the order from the devil itself to build the castle. In exchange he would receive one of the daughters from de Macleod clan leader. In an act of desperation the girl throwed herself from one of the towers and died.

Fun fact, we have some Dutch history overhere again. The moment James Graham was on the run, a man called Karel Stuart was negotiating in Breda (a city in the Netherlands) about the fact he could become the King of Scotland. One of the conditions was that Graham would be relieved of his title, but as a compensation for that he would become a member of the Order of the Garter. The Order is regarded as the most prestigious British order of chivalry. This title would have saved James Graham from the dead penalty.

Well this day we noticed a lot of fog moving around the castle itself, and it makes you wonder…?

Rules are simple:
– The topic for this edition is:
– Create a new post with one photo
– Use ONLY your own original work, plagiarism will be flagged and reported
– No NSFW images
– Use the hashtag #travelphotocontest
– Mention @lightcaptured in your post, for example: “This is my entry for the #TravelPhotoContest by @lightcaptured”
– Adding your personal touch, a short story, the location, EXIF data, etc. is not obligatory but will definitely make your entry much more appealing and increase its chances of success
– Reply at the original post from this contest

You see not the hardest rules to be part of the competition.

The picture for the contest

The moment we were passing by I noticed this scene and I stopped the car and ran out of it. The fog was to beautiful around Ardvreck castle and moving pretty fast so no time to use my D700 instead I grabbed my Iphone ?. 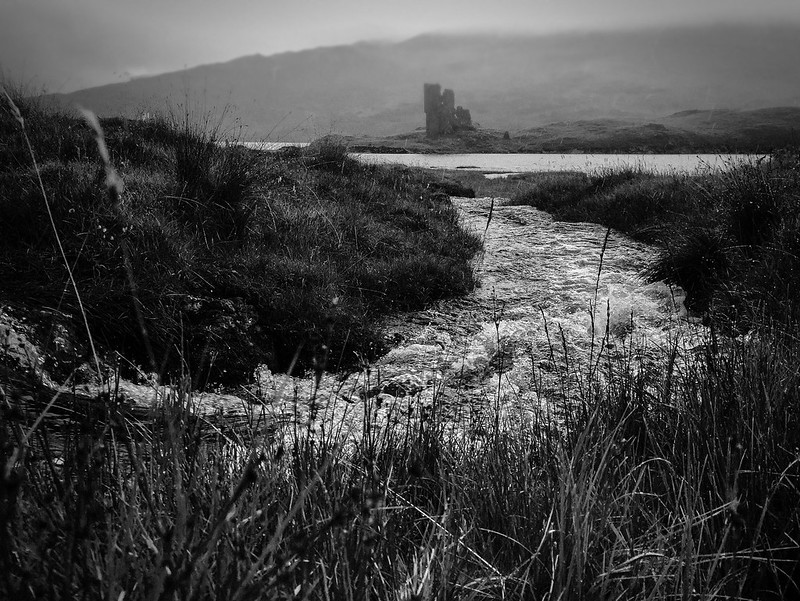 They come back and act like they never left

I’ve created the whole post around it with pictures shot by my Iphone. In these bad lightning coniditions I think the images ain’t perfect, but the quality is certainly good enough to tell a story. So my point of view won’t change. YES gear does matter, but it doesn’t have to mean that you can’t take pictures with a phone.