Only thing left for this trip where some watersports activities. End of the week there should be some wind around Istria, so we decided to find a campsite that is open at the end of the season at the waters of the Adriatic Sea in that specific corner. We got here during the night after an interesting day of driving through the landscape. The drive was pretty intense because we took the longer drive through the midlands. You can still see the damage done to the midlands from this beautiful country by the last war. The tourist places are already repaired and looking fresh and new. But here you still see abandoned houses even villages because they are shot, bombed. Some of these houses people still do live and work. bullet holes or not! Without this history the landscape is reminding me at my period I’ve worked in the Scandinavian countries. This is because of all the green surrounding you while driving. One second you’re at the crowdy Plitvice lakes, and the next you’re driving in this silence and totally different world. Those differences so close but yet so different they produce a silence in you… 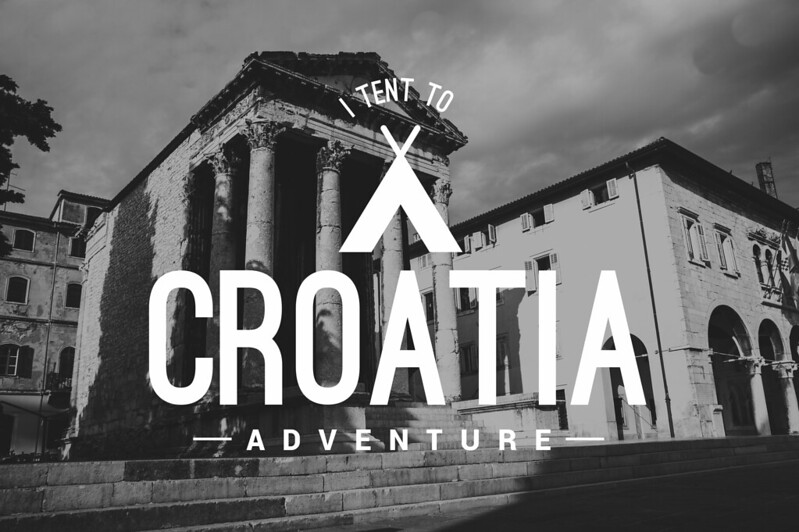 After a whole day of driving we reached our goal for the day around the city of Pula. We found a campsite with a spot at the water. Now we only had to wait for some winds. We did a short walk around to enjoy the sunset and see some of the surroundings. After the walk we prepared ourselves a quick meal and time to go to bed. Busy day ahead of us tomorrow.

My girlfriend her bike still needed a repair job, or actually some proper parts to fix it. We found a bike repair shop at Peroj. We brought her bike there, and the guy told us that he could probably fix it in an hour. In the meantime, we took the car and drove to the beach. Here we went for a walk along the coastline where we spotted a lot of salamanders and cats… There are a lot of cats here!

After an hour we decided to go back and have a look with the mechanic and his repair job. While we returned, we spotted my girlfriend her bike still in the shop. That wasn’t a very promising view… So we entered the shop and the mechanic told us he had some bad news. Just what we expected. The freewheel wasn’t only damaged itself but the bearings wouldn’t fit in the freewheel anymore too… The problem was the shop didn’t have a new freewheel for a 26 inch MTB. The guy told us we were old fashioned! He showed us the prices for a new one including the hours of work and the price for a complete rim. For the last part he had a Polish friend wo still has some 26 inch MTB rims. Easy choice, a complete new rim it will be. So he called his friend to order the rim for my girlfriend her bike.

After the replacement of the rim we could finally start biking again. We decided to ride on our bikes that afternoon to Pula. A city nearby our campsite. ?

The weather was perfect for an easy ride, and so it was. The terrain was flat and easy riding all the way to Pula. We entered Pula in the harbor area, close to the Roman forum, but our main target was the amphitheater (I think everyone’s main goal must be this arena).

This is the main square from the city. The temple is located at the place where in the older days the ancient roman forum took place. They build the temple between the year 2BC and 14AD when the emperor died. Through the years the function of the temple itself changed, it served through the years as church, granary, and nowadays museum. During WWII it was bombed in 1944 and in the years after the war it is reconstructed and finished in 1947. There was also a twin temple they said, constructed at the same time as Augustus, this one was called the temple of Diana.

At the main square you’ll also find the Communal palace. It is still in use by the city government so it’s functions hasn’t changed throughout its long history. It is build in 1295 on the remains of an old Roman temple. The remains of this temple is the only wall left from the Temple Diana, just mentioned. The building was closed while we were here so don’t know too much about this. The forum is further surrounded by cafes and bars. The ancient remains of the forum itself were found during constructional works for new buildings. The remains of the forum you can see nowadays in the bank located at the forum.

After enjoying watching people crossing the forum and taking some time for taking pictures from the temple it was time to continue the exploration of this small city. We wandered with our bikes in our hands through the small streets.

We walked northwards and came across the cathedral of Pula. We haven’t been in this building because the time we arrived a large group of tourists just entered the building. Because of this we decided to enjoy the sunshine outside instead of strolling behind a group of tourists. But the cathedral is build upon the place where the Christians already gathered during the ages of their persecution. Outside we could see the oldest remaining parts of this building, they are dated somewhere in the 4th century. But there is not much left because of a large fire around 1200. A funny this is that this church didn’t have a belfry from the very beginning. This belfry they started to built somewhere in the 17th century. So that is the reason the belfry isn’t connected directly to the main building of the cathedral. To build this belfry they used rocks from the amphitheatre. From here we could ride our bikes again and we decided to go up, to the castle to have a view over the city and the bay.

The streets are easy to follow so we arrived in a few minutes at the castle. You can bike around it when you have an MTB. Don’t do it with a citybike, you need to jump sometimes from demolished walls. The views wheren’t as spectacular as we hoped, but it was good enough to get a good perspective about the size of the city. 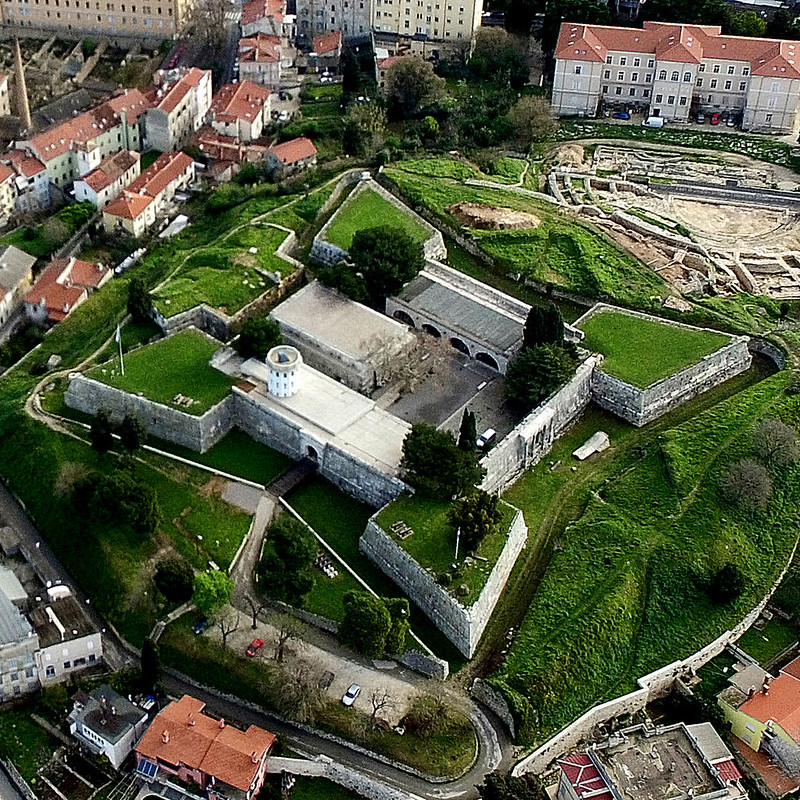 The castle itself is built in 1630, and ofcourse it was build because the city and the harbour needed to be guarded. The city had a great significance in the maritime trades from the North Adriatic. Nowadays it houses the Historical Museum of Istria.

From here we continued our way into the city centre again.

We came across a cute small church and before you could enter this you needed to climb some stairs. So up those bikes on our shoulders and there we go. I went inside (I always like the ambiance in a church, don’t know why but the great silence has something) and wandered through the small garden and brought a visit to the small church. Not many people where here, only one woman. I left the stage for her so she could pray in silence again.

Behind the streets of the church we found an old roman theatre, it was laying at the bottom of the hill from the castle. This wasn’t the amphitheatre we’re looking out for, but it was still nice to see this small one. We found out here that Pula had once a period of time three amfitheaters. The largest one isn’t preserved. This one was south of the city walls. The middle one is still there and is the one we’re looking for.

After the small theatre we entered the city center again. Our ride before brought us across the chapel of St Maria Formosa. The Golden gate is constructed a few years before the beginning of the year count. The reason it was build is to honor three members of a family called Sergi. Those thre hold important positions at Pule during that time. Fun part about this gate. The decorations are only visible at one side (Wester town side) while the opposite side the eastern side remains uncarved because it wasn’t visible enough.

I just mentioned the chapel of Maria Formosa, we visited a floor mosaic found under a block of houses around the chapel. They found these floors because of a bombing during WWII. Pretty detailed mosaic, it is divided in approx. 30 till 40 areas. They left the mosaic floor at its original height so they preserved it at the place where they found it. You can see that the floors of houses then was 2m lower than the current houses . Funny to see this, because where I live the floors only go lower and lower because we empty the polders from the water running through the lowest point.

Finally we got at the amphitheater, this arena is one of the most important buildings in Pula I think. Once this was the site for famous Gladiator fights. They build this theater the first century after AD. It is one of the last remaining amphitheaters from the Roman empire. The theater itself had space for 23000 visitors. The theater stood proud and fierce till the fifteenth century, after this the stones from the building where used for the castle and later the belfry for the cathedral of Pula. General Marmont decided to restore the theater to its origins. Nowadays the theater hosts concerts, opera and filmfestivals. Con about this is that the theatre only has space for 5000 visitors during those events instead of the 32000 back in the days.

The best parts from the theatre are the outside walls. There aren’t many theaters left where the walls are complete. The outer-walls from this theatre are quite unique. Even in Rome they haven’t a theatre in this good condition. In the underground corridors they exhibit old architectural finds. Most of them is machinery to produce olive oil and wine back in the old days.

The theatre had in its glory days an length from 67m and a width from 541m. The fights took place in the middle centre, the so-called arena. The size of the theatre is also a reason for the location outside the city walls.

After the theatre we wanted to have a look for two fortresses in town. But after seeiing the first one and both not impressed by the looks of it, we decided to call it a day. This because we hoped to return just before the sunset at the campsite, so we could enjoy the colors while sitting in front of our tent. We did make it just in time, but because I was in a hurry a bit, I ruined the sunset pictures…