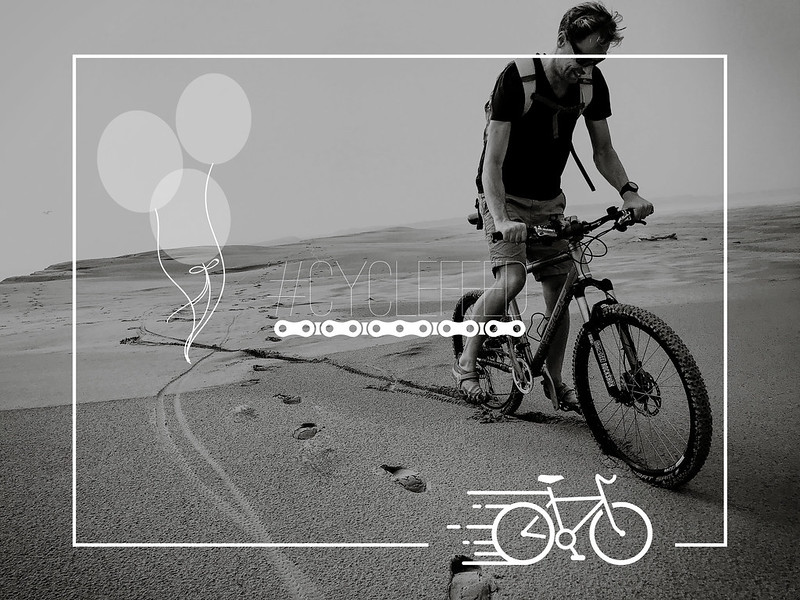 This post is a little surprise for @mrprofessor. I want to give his new project #cyclefeed a boost. I’m just a little player but I hope he likes it. So with this in my mind I went on a trip in my local area on my bike together with my girlfriend. Too bad we could only stay on the asphalt. Because the tyre’s of my girlfriend her MTB damaged for some reason… The innertubes where getting out the outer tube in small slices. No spare available, so she grabbed my old city-bike. ? strong woman. Why? Because we did a 50km ride in 30+ degrees.

So we started at my home and ride along the shores of the Westerschelde searching for some nice history of the area.

Well as many readers already know I’m from the Netherlands. I live in the southwest in the province called Zeeland. We started our ride at the village where I live. We ride along the coastal line to the most beautiful part of the province in my eyes. It’s called “de Zak” by the locals. Literally translated it does say the bag. When you watch the map I think you know why we call it like this.

Why is this area so special? It is one of the oldest polder landscapes from the Netherlands. Here people had battles against the water for century’s. Those battles lead to a system of many small dikes meandering through the landscape. Those dikes nowadays create a lovely motley pattern in the landscape.

The lovely characteristics from de Zak are the result from a grimly past where clear marks from floods and reclaiming land tell you the story. Long time ago somewhere in the 12th century the people living in this area saw the necessity to build dikes against the constantly expansion from the rising waters. The medieval landscape characteristics is still visible nowadays by the shapes of pond soil, small dikes and bank of creeks. One of the villages called Nisse is still in the center of this areas. The old parcels around the village traditionally fringed by hawthorns. These borders flower in spring and made the air filled with lovely smells and blossoms as far as the eye can see.

Small village lying at the shore of the Westerschelde. It’s a small agricultural village. Once it was an important ferry harbor with ferry’s to Terneuzen and Antwerp. The village even had a second harbor with one special purpose, agriculture. They transported the bulk from here. Nowadays these harbor isn’t in use anymore. The ferry harbor slowly silts but is still in use by little ships.

Hoedekenskerke wasn’t only reached by water, but by land as well. They still have an old train station where you can find the old steam train still riding it’s track between Goes and Baarland for the tourists in the summer months.

The water of the Zwaakse Weel is the proof that there was sea in this area long time ago. This old creek is a leftover from a mighty shipping estuary. Where sailing ships once passed, you will find wide reed belts, pollard willows, marshy fields al fringed by small dikes. During spring those dikes are covered with a collection of wild plants with flowery colors. This wealth is mainly the result of the sheep flock who take care of the natural grazing of the dikes. When you ride around here on your bike, you will have a great chance to meet the flock.

From here we cross the island heading north, so we can see both arms of the Schelde.

This little village is lying at the borders of the nearby city Goes. This small village is in the middle of a national park called the Poel.. This little village is originated on the top of a creek ridge. The name of the village those days was Versvliet. The abt from the city Middelburg choose to build a church here. That’s where the name is coming from nowadays S’heerabtskerke. Like Hoedekenskerke this village lived by the agriculture. The small amount of people living here took care of their own business. Nowadays they still do. 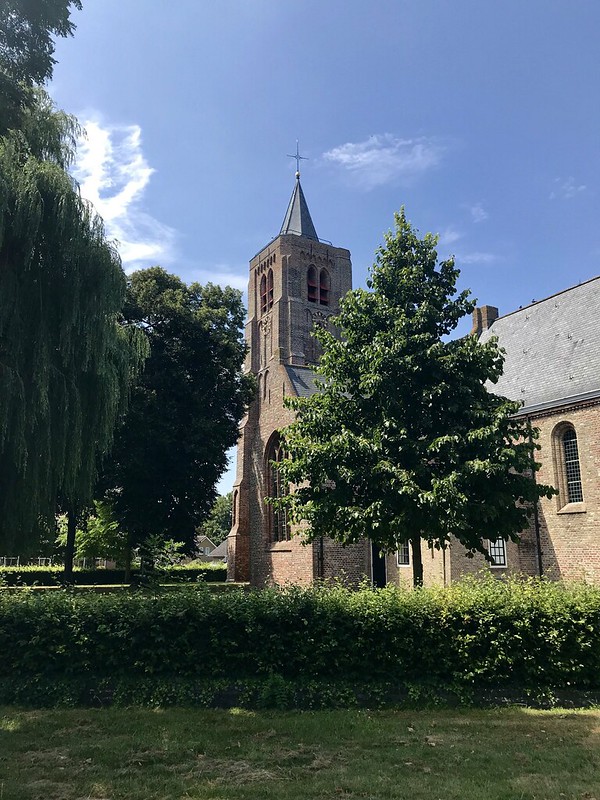 In front of the church there is a pont called a vaete in our local dialect. You can still find a few of these ponts in some villages here. Now used by the local ducks and frogs, but nowadays it was used by the cattle. 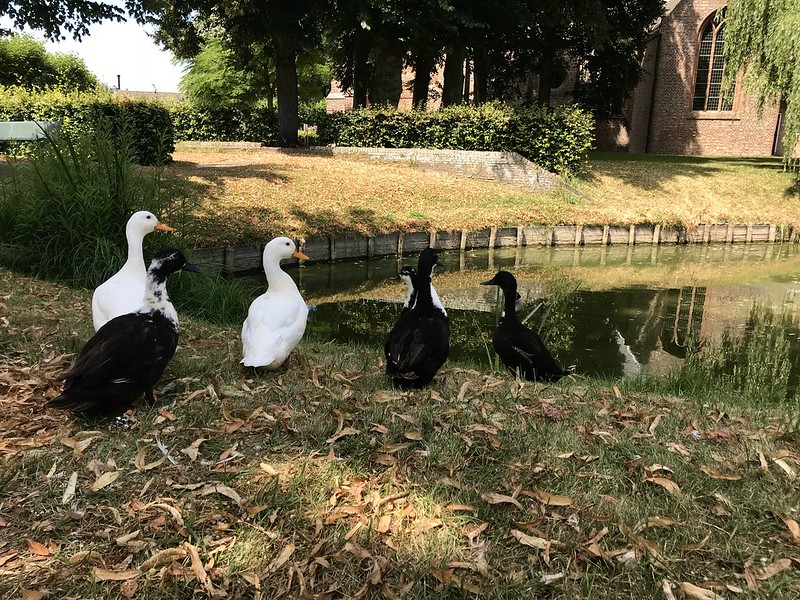 This city is literally the center of our province. It’s not the capital but Goes and Middelburg are comparable in my own eyes. Goes is called in our dialect Hoes. And it’s a so called hanseatic city. 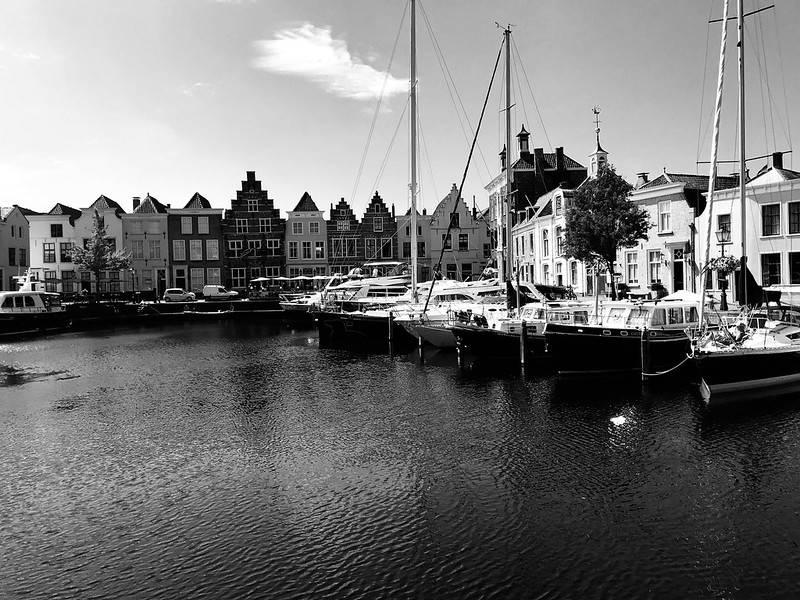 Goes has a harbor in the city center. It’s connected by the Oosterschelde through the canal Goese Sas. The walls in the harbor are, a so called rijksmonument (national heritage). Around the walls are historical houses and one of those is called the Soepuus. This is a former watermill working on the tides.

Funfact: During the Carnival the name of the city is transformed to Hanzehat

The Oosterschelde is an arm of the river called the Schelde. Till the middle ages this river wasn’t that big. By floods, silting and the construction of dikes it reached its current size. The tides and the presence of fresh and salt water in this park live thousands of plants, birds and other animals like sealions and dolphins.

Since 2002 the Oosterschelde is a so called national park, to preserve the unique nature we have in this area. It is the biggest national park from the Netherlands.

Most of the area from this National Park is under the surface, so you need to dive under water. Divers from all over the world knows about the beauty of the biodiversity underneath the watersurface here. A special thing about the life under water is that they know seasons as well. In winter water temperature can go as low as -2 degrees Celcius, but in summer it can reach temperatures above 24 degrees Celsius. But to dive here you need to have a lot of experience, there is a lot of current because of the tides. You really need to know what you have to do underwater.

Another epic view from this area is from the sky, you can even see it from space. It’s recognizable because of the Oosterscheldekering. This landmark is part of the Delta works we are famous for worldwide after the flooding disaster in 1953 here.

We continue the bicycle track along the shores of this beautiful natural (water)park. Heading east till Wemeldinge so we can go south once we see the canal through Zuid-Beveland.

We’re heading down south along the shores of a canal called Canal through Zuid-Beveland. All the people living here know where this canal is, but not many know something about its history. Last year we had a celebration because the canal existed for 150 years so the villages at the shores celebrated this big time. It was one of the busiest canals through west-Europe, In the early years of the sixties there were passing by hundreds of thousands yearly. After 1975 this number decreased because of the opening of the Schelde-Rijn Canal. Nowadays 44000 ships passing by. At the end of the 80’s the canal reached its current shape. The canal widened because of the ships growing in size and more and more ships needed a direct passage to Moerdijk from Antwerp.

By the transformation of the canal, one village got separated from it. Formerly the canal divided Hansweert and Hansweert-Oost. The locks in the canal were rebuild. Nowadays we still have the old locks but where once water flooded the grass is growing luscious. The old locks are part of a park and show the history of the village. 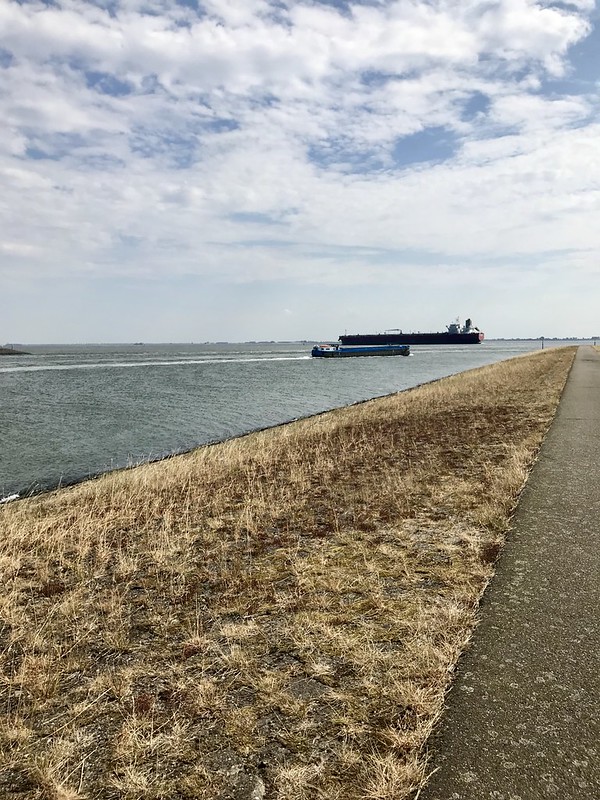 I can tell you guys so much about the canal, my village and the Oosterschelde ofcourse. I will start a separate story about them. Otherwise there will be too much information about everything to keep your attention at the main purpose of this post @cyclefeed. Please follow them and show your support to add them in your curation trail.